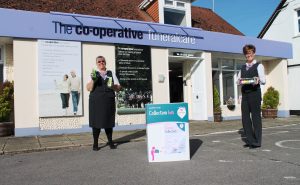 A funeral co-ordinator in Rose Green is looking forward to making the first delivery of donated goods after she helped set up collection boxes in three locations earlier this year.

Shirley Heaton at The Co-operative Funeralcare in Nyetimber Lane initially approached the Bognor Regis charity My Sisters’ House and had a meeting with the CEO as it was a cause that touched her and her colleagues’ hearts.

The other Southern Co-op branches in Felpham and North Bersted also agreed to back the cause and were pleased to support the charity with a £400 donation via the Neighbourly Community Fund.

Southern Co-op – a regional, independent co-operative – donated £40,000 to the Neighbourly fund which was set up to support the causes and individuals most affected by the pandemic.

“When women finally take the step to move on from a relationship which has involved domestic abuse, they often have nothing. So one of the first things we wanted to help with was having collection boxes in our branches.

“Simple things like shampoo, deodorant, toothpaste, toothbrushes, socks and pants are all things we take for granted but, when you don’t have these, life is especially hard. My Sisters’ House gives out these items in the form of packs to help these women.”

My Sisters’ House is a women’s centre in Bognor Regis which provides advice, practical support and guidance to women who are suffering domestic abuse, poverty and mental health issues.

Julie Budge, CEO and Founder of My Sisters’ House Women’s Centre, said: “COVID-19 has resulted in many more families and individuals living in poverty where the choice is to buy food instead of basic toiletries. Coming up to Christmas this will be crucial as we will give out so many more packs.

“We are grateful for the donations being made as some of the things we are currently in need of are shampoo, deodorant, talcum powder, body wash, toothpaste, tooth brushes, flannels, towels, new underwear and hairbrushes.”

The charity celebrated International Women’s Day ahead of lockdown on Friday 6 March which the branches donated items for the tombola stall and volunteered at the event including baking cakes for refreshments.

Shirley said: “It’s been a taxing time for us all but we want to let people know that the donation boxes are still open for people to drop off goods to us for My Sisters’ House.

“Due to lockdown, we’ve only just been able to get enough together to make the donation which we’re looking forward to dropping off to the centre very soon. A big thank you to everyone who has helped with this.”

To find out more about making a donation, contact The Co-operative Funeralcare – Rose Green on 01243 268681 or RoseGreenFuneral@southerncoops.co.uk.

Organisations based near Southern Co-op’s stores or funeral homes can apply for grants using their new or existing Neighbourly profiles via www.neighbourly.com/goodcause/ and using the referral code SouthernCoopPartner.