All 64 men from Whitchurch who died during the First World War are being remembered with a public display of thanks on a funeral home’s window. 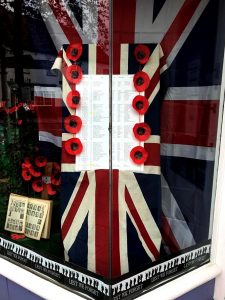 Funeral Co-ordinator Denise Meaden has also added a personal touch with a wedding picture of her nan and grandad – who fought in the second world war.

Her grandad’s medals are also on display alongside an easel listing the names of the 64 men from Whitchurch who died during the first world war.

The display includes their age, the date they were killed and where they lived in Whitchurch.

Southern Co-op’s Whitchurch Funeral Co-ordinator Denise said: “My nan lost three of her uncles during the First World War who were all from Whitchurch so each of these men are included in the list of people being remembered – Frank aged 27, Richard aged 20 and Ralph aged 17. 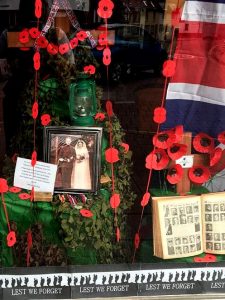 “We hope that the window not only marks the centenary but also means something to the local community.

“We have already had a huge response from the general public. We have had several people come into the branch to say how meaningful it is.”

Residents are currently able to get hold of poppies in the branch until 11th November and all proceeds will go to Royal British Legion.

Whitchurch Funeralcare is located in Winchester Street and is part of is the regional independent co-operative society, Southern Co-op.

To find out more about the branch, visit www.funeralcare.co.uk.