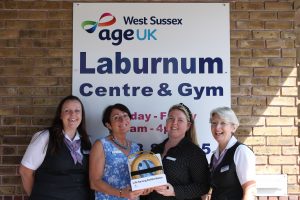 A Bognor defibrillator donated by local co-operative colleagues has led to life-saving devices being installed in five other centres.

The Laburnum Centre in Lyon Street approached The Co-operative Funeralcare branch in North Bersted earlier this year to see if it could help fund a new defibrillator.

The centre is an over 50s activity hub in Bognor run by Age UK West Sussex and it holds more than 80 classes a week for members.

With nearly 1,200 members, the co-operative colleagues were only too happy to help and joined up with their colleagues in Rose Green and Felpham to donate £950.

Angela Austin, Funeral Co-ordinator at the North Bersted branch – part of Southern Co-op, said: “The centre is absolutely brilliant. It’s a real hub. Being part of a regional, independent co-operative, we do our best to support our local community through donations or volunteering so this was a perfect fit as the centre makes a difference to so many people.

“We are lucky to have this centre at Bognor so we were delighted to be able to help them like they help so many others.”

The defibrillator is now in place at the Laburnum Centre where Southern Co-op’s Bereavement Centre has also been holding free monthly support groups since June 2018.

Sarah Smith, Bognor Regis Manager for Age UK West Sussex, Brighton & Hove, said: “We also have a thriving gym which is increasing in members on a daily basis. We have a group of key staff and volunteers who are always in the gym so nobody is left to their own devices so people feel very safe and confident in their work out sessions.

“Due to the growing numbers in our gym and exercise classes over time we thought it was prudent to try and get a defibrillator. We approached the Southern Co-op as we have always had a fantastic working relationship with Angela and the team and she was sure she could put forward the idea and get us some help. And the rest is history. 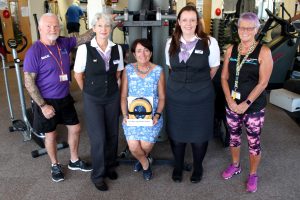 “When we advised our head office of the money we would soon be receiving from Southern Co-op to purchase the defibrillator, it started alarm bells ringing. My boss, Gary Hardley put forward that all his activity centres should really have one of these bits of kit on site. Head office agreed and have secured funding for equipment for the Crawley, Haywards Heath, Burgess Hill, Adur and Arun centres.

“This is great news for all concerned. Thank you to the Southern Co-op for starting the ball rolling.”