£1000 has been donated to the Portsmouth Mayor’s Charity following the success of a conference aimed at sharing expertise and knowledge about working with loss and bereavement.

This is the second year that the conference, organised by The Bereavement Centre and Solent NHS Trust and supported by The Southern Co-operative, has been held following an overwhelming response from attendees last year about the value of bringing health professionals, volunteers and carers in Portsmouth together to share knowledge and experience. This year’s conference, which was held at the Mountbatten Centre in Portsmouth, attracted 140 delegates.

Speakers including representatives from Rowans Hospice, Off the Record, the Muslim community, Co-operative Funeralcare, The Bereavement Centre and Solent NHS Trust gave their perspective, supported by an exhibition of charities and organisations that offer bereavement services.

The £1000 to the Portsmouth Mayor’s charity was donated by The Southern Co-operative. Portsmouth Lord Mayor, Lynne Stagg, met exhibitors before officially opening the conference, and said: “I was very impressed by the range of agencies and services represented at the conference and very pleased to see both professionals and voluntary sector people working together. With financial cut-backs resulting in shrinking services, we are relying more and more on the voluntary sector to deliver services, not just to `fill the gaps` but to work with professionals to give the best all-round coverage possible. In addition working in partnership results in a better understanding by professionals and the voluntary sector of the bigger picture and which service is best suited to individuals.”

“The £1000 donation to my Appeal will go towards helping in two areas of `bereavement` in the wider sense of the word. One of my charities is Brain Tumour Research and in addition to carrying out research into ways of treating brain tumours, it also gives support to those suffering from brain tumours and their families who are so often facing bereavement. One of my other charities is Young Carers, children aged between 5 and 18 who are suffering the loss of what would be thought of as a `normal` childhood and who will be helped by being able to have a fun day out, away from their responsibilities at least for a day. The donation is warmly welcomed and a big “Thank You” from me to the Bereavement Centre.”

‘That some people truly care’, ‘it has been a worthwhile and vital conference which needs to be carried on in future’ and ‘I found the diversity of the speakers fantastic, each one interesting and knowledgeable’ were some of the many positive comments fed back to organisers following the conference.

The Bereavement Centre, which is supported by The Southern Co-operative, offers free emotional, practical and social support for bereaved people and their families, plus free education and training for professional people. 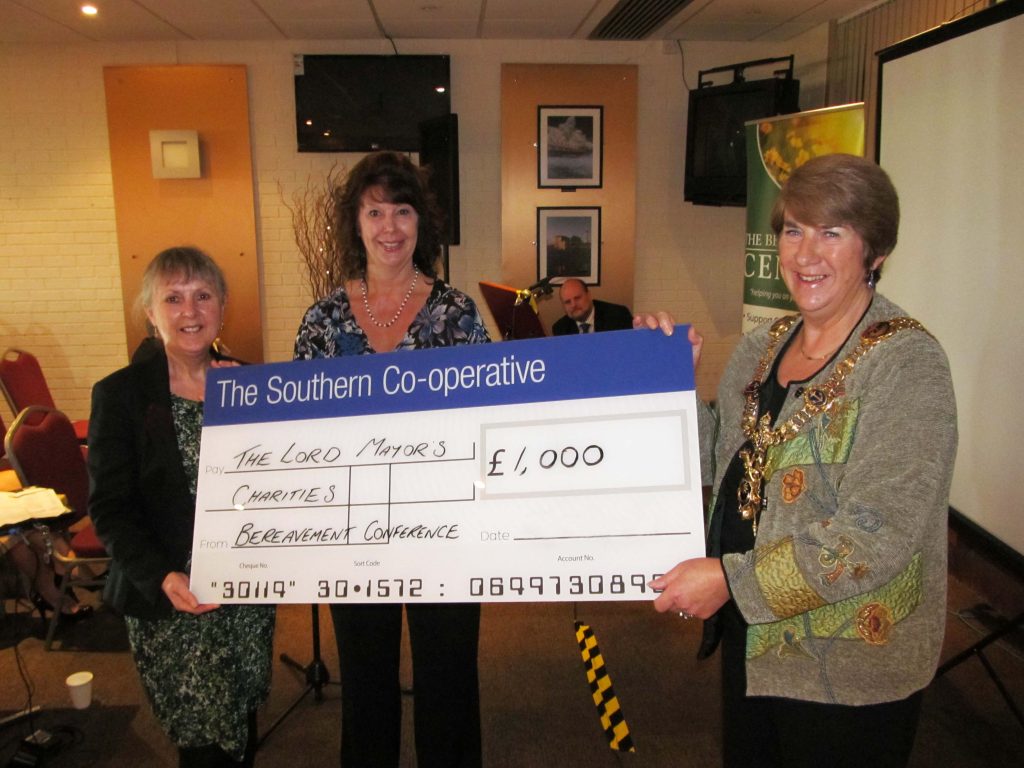