Bats, balls and bouncy castles are all descending on a town nestled between Hampshire and Surrey to bring communities together in a quintessentially English fashion. 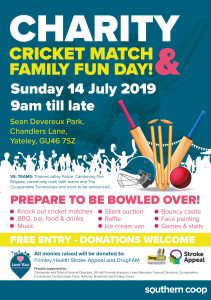 The charity cricket match and family fun day is being held on Sunday 14 July at Sean Devereux Park in Yateley.

It is being organised by nearby branches of The Co-operative Funeralcare and associated funeral directors as a way of bringing people together from the community.

For those who are less interested in cricket, there will also be a barbecue and food stalls including ice cream and cakes, a bouncy castle, face painting and other family games with 20 percent of profits being donated to charity.

To raise money for Frimley Health Stroke Appeal and DrugFAM, there will also be a raffle and a silent auction with the chance to bid on a Lenovo 7” tablet, a NOW TV Smart Stick, a bottle of Bushmills scotch commemorating the concord, a round of golf for four at Billingbear Park Golf Course, a pet photography session with Helen Beech Photography and much more.

Jarrod Turner, Team Leader at The Co-operative Funeralcare, said: “When we first came up with the idea of holding a cricket match, we were picturing a small gathering of people from across the area. But there are so many people in our community that wanted to help that it has grown into a day with activities for everyone.

“I am really pleased that it will also be fundraising for two local charities. Frimley Health’s appeal to build a unit which can be used by patients and their families is particularly close to me as my mum had a stroke 20 years ago now and I saw what rehab she had to go through.

“I dare say there will a lot of people at the event who have been affected by strokes as it is quite common. My mum was decorating her house and she collapsed. She died three times on the operating table. She had to give up work but over time she has recovered and now only has a slight slur in her speech. A lot of her recovery is down to the support she had through rehabilitation.”

On the day, cricket matches will start around 9.30am with all other activities taking place throughout the day finishing with a prize giving from 4-5pm.

To find out more, visit your local branch. Location details can be found here.