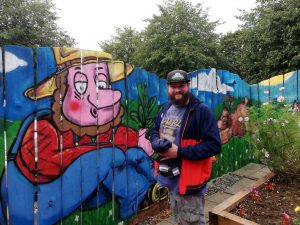 A funeralcare co-ordinator, who has brought colour to the lives of residents in Frome and Southwick, has been awarded for his ‘massive impact on his local community’.

Selected out of nearly 300 colleagues working in funeralcare at Southern Co-op – the regional, independent co-operative, Tom Parfitt has been named as Funeralcare Colleague of the Year.

Working at The Co-operative Funeralcare in Frome Tom Parfitt was selected for his hard work and dedication to the community after volunteering his time transforming lifeless items with colourful murals.

Last year, Tom adorned a bus at Hope Nature Centre in Southwick with animals of all shapes and sizes which is being used at the centre as part of its work to train people with learning disabilities in animal care and catering skills. 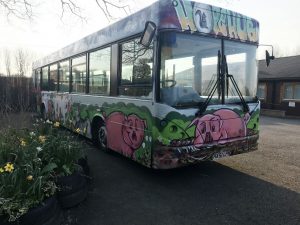 He also helped a Frome day care service with his creative flair at Colliers Court where services are run by Discovery for adults with learning disabilities and autism. The focus of the upcycle project was to make the garden area a brighter and more pleasant area for the facility users to engage in garden activities.

Tom, who has worked at Southern Co-op for four years after leaving the armed forces, said: “In a nutshell I was gobsmacked when I heard. My manager had just completed my COVID-19 secure audit and then she went super serious saying she had something to tell me. Honestly I was worried.

“When she explained why I had been put forward I was humbled. I love the job that we do and all the team that surround and support me. Plus it’s an added bonus to be able to donate my hobby in the way of art to as many people as I can. I just wanted to say thank you for the award it was a shock and it will be cherished.”

Jennifer Walter, Sector Operations Manager for the region, said: “Tom has been invaluable to the team and me with his unwavering positive attitude, complete flexibility and dedication to the families he is supporting in branch.

“On top of all that he has done with the branch and the funeral team, Tom has made a massive impact on his local community. It has also escalated to Tom supporting other branches with artwork community projects and requests coming in thick and fast locally for his help.

“I cannot speak highly enough about the efforts, enthusiasm and dedication Tom has shown over the last 12 months. He is an invaluable member of my team.”

The praise didn’t end there as Tom’s Sector Operation Support, Helen Jephcott, said: “I’m so pleased for him, he really does deserve it! He is loved by all the families he works with as he is so passionate and knowledgeable about his role and making his families feel 100% at ease.”

To find out more about Southern Co-op’s community programme or to view the latest vacancies, visit www.southernco-op.co.uk.