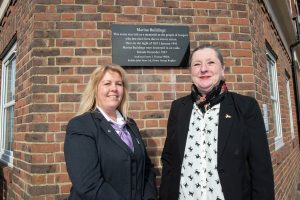 Gosportarians gathered together yesterday to remember those who suffered during the enemy action of World War II after a replacement plaque has been sited in Stoke Road.

Marking one of the worst nights of World War II for those living in Gosport – 10/11 January 1941, the replacement war memorial plaque is located on the newer Marina Buildings which were destroyed in air raids.

Yesterday’s commemorative ceremony was organised by Councillor Dawn Kelly, who arranged the replacement plaque thanks to funding from Southern Co-op and its funeral care branch in Stoke Road, after the previous plaque became weather-worn and difficult to read.

The plaque now states: “Marina Buildings. This stone was laid as a memorial to the people of Gosport who lost their lives due to enemy action. Here on the night of 10/11 January 1941 Marina Buildings were destroyed in air raids. Rebuilt December 1947. Architect Ernest I. Thomas FRIBA, Builder John Hunt Ltd, Owner George Brigden.” 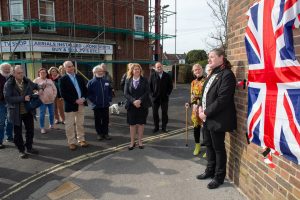 Dawn Kelly said: “The previous plaque started life in St Edwards Road and over the years it was moved and had become very weathered. The stone was so hard to read that it made reproducing the text a challenge.

“It needed replacing so I was very pleased when Southern Co-op offered to do it for free via their stonemasons. It is a mark of respect for people who put their lives on the line so it is only right for it to be restored and a commemorative ceremony to mark the occasion.”

During World War II, a total of 114 people lost their lives in Gosport as a result of air raids.

According to Gosport Heritage Open Days, Gosport experienced 1,591 alerts, 61 raids, it was hit by more than 400 high explosive bombs and over 10,000 incendiary bombs were dropped.

Andrea Witham, Funeral Co-ordinator at The Co-operative Funeralcare in Stoke Road, Gosport, said: “With war in the forefront of our minds, it seems even more poignant than ever to mark this occasion and commemorate all those who have lost their lives over the years.

“With many of the people who lived through World War II no longer with us, it is important for the rest of us to take up the baton and ensure their experiences continue to be remembered.”

Special thanks also to Haven Memorials and The Queens Hotel.