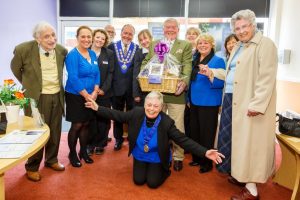 Local Samaritan, Chris Saunders has been crowned winner of ‘Westbury’s Best Neighbour’ run by The Southern Co-operative Funeralcare for the kindness and support freely given to his neighbours and time devoted to the wider Westbury community.

To commemorate their two year anniversary, The Southern Co-operative Funeralcare on Warminster Road, Westbury launched the competition to celebrate those who help make a difference within their local community. The presentation took place at the funeral home with snacks, a celebration cake and plenty of celebration.

Mr Saunders, the ‘Best Neighbour’ in Westbury said: “In a word, I was flabbergasted to receive the title! My wife, Esme and I have always tried to help Mrs Clegg and her husband whenever they have needed it, by driving them to appointments, helping with shopping or little things like bringing in their bins. It is extremely humbling to know Mrs Clegg nominated me as Westbury’s Best Neighbour, particularly as it is for tasks that one would hope others would facilitate in the same position as us.”

The Mayor of Westbury, Councillor David Bradshaw, who presented Mr Saunders with the title said: “I have personally known Chris Saunders for two or three years due to our joint involvement in the Westbury’s Probus Association. During this time, Chris has always shown himself to be a caring individual and I am please that Chris has received the ‘Best Neighbour Award’. In my opinion, he is a very worthy recipient! Well done Chris!”

Karen Coleman, Funeral Co-ordinator for The Southern Co-operative Funeralcare in Westbury who created the Award, said:

“At The Southern Co-operative Funeralcare, we are true champions of supporting and getting involved with our local community and the ‘Westbury’s Best Neighbour’ competition was a fantastic way to showcase the amazing people who live here. Over the years, Mr Saunders has selflessly aided his neighbour through a variety of tasks and we felt that he was an extremely deserving winner!”