Isle of Wight Foodbank is to benefit from 15 new collection outlets as the result of a partnership between The Southern Co-operative, its co-operative funeralcare business and The Co-operative Group.

The partnership was initiated by The Southern Co-operative as it sought to find a more viable solution to the shortage of stock for the Isle of Wight Foodbank. Last May, The Southern Co-operative (TSC) donated £1000 worth of food to match fund a donation from Isle of Wight Council in response to an emergency appeal by the Foodbank. This followed a £12,500 donation to the Island’s Foodbank from TSC’s Community Support Card scheme at its Cowes store which enabled the Foodbank to buy a new van to collect and distribute food donations across the Island.

Gavin Hallam, Area Manager for The Southern Co-operative explained: “Community support is very important to The Southern Co-operative and with more people seeking the help of the Foodbank, we wanted to provide a more viable long term solution. We’ve installed new collection points in our own stores in Cowes, Freshwater, Lake, Mill Hill Road in Cowes, Ryde and Shanklin and The Co-operative Group is adding these collection points to its stores in Shanklin, Ryde and Newport. In addition our own co-operative funeralcare branches in Sandown, Newport, Ryde, Freshwater, Shanklin and East Cowes will take in donations of food to pass onto the Foodbank.” Gavin added: “Our customers are always so supportive of our community work and fundraising, and we appreciate their generosity with donations of packet, dried or tinned foods to help those in real need. Having more collection points also helps to publicise the scheme for those who need its help.”

According to Hannah King, Project Manager  at the Isle of Wight Foodbank, demands on the foodbank are increasing with 6241 people helped in 2013/14 compared with 4018 for the same period in 2012/13. Hannah said: “Having organisations such as The Southern Co-operative on board and supporting our work in this way is fundamental to the success of our being able to keep up with the demand we face serving our clients in need. Not only does their help assist in increasing donations but it also flags up the remit of the foodbank and the plight of those we serve.”

Mike Partridge, Corporate Partnerships Manager at the Trussell Trust, said “We are delighted that The Southern Co-operative has been so supportive of the Isle of Wight Trussell Trust foodbank. It’s partnerships like this that will ensure local communities are equipped to help their hungry neighbours.” Mike added: “One in five mums are skipping meals to feed their children in the UK today and rising living costs mean that more families are struggling than ever. Over the last six months we have seen the demand for foodbanks triple. Since April 2013, our network of Trussell Trust foodbanks has provided three days emergency supplies to over 550,000 people in crisis. The Southern Co-operative’s support at this time of acute national need is really appreciated.”

In addition to Foodbank collection points on the Isle of Wight and in six of its Portsmouth stores, The Southern Co-operative recently donated £1000 to Chichester Foodbank and extended collection points to four of its stores in the city plus £5000 to Haywards Heath Foodbank through its Community Support Card scheme. isleofwight.foodbank.org.uk 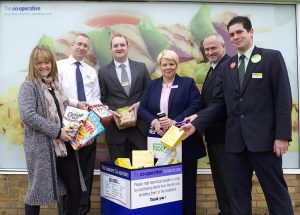 View All News
X
We use cookies to improve your experience on our website. By continuing to use our website you agree that you are happy for us to do this. Your information is collected in anonymous form. We only share this information with Google. For more information on how we use cookies, or how to revoke consent by changing your browser settings please see our cookie policy