The importance of Remembrance Day is being brandished in the windows of funeral homes across the south of England thanks to help from children, communities and colleagues.

To mark 100 years of the Royal British Legion, Southern Co-op is making a donation of £5,000 and is encouraging its funeral colleagues to mark the anniversary with bold window displays.

At The Co-operative Funeralcare – Cowplain, children from St Peter’s Catholic School in Waterlooville have painstakingly painted 930 memory stones to remember the 930 people killed in Portsmouth during the Blitz. A further 2,837 were injured and more than 6,000 properties were destroyed. 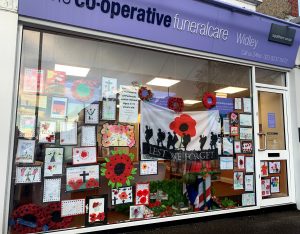 Jackie Duthie, Cowplain Funeral Co-ordinator, said: “The children from Year Six have created the beautiful poppies that we have cascading down on the outside of the window. Out of lots of small crosses the children have also created this wonderful large cross, which looks so poignant and so effective.

“They will be coming along to the branch on Wednesday at 11am to hand out their memory stones to the community in Cowplain. Remembrance Day gives people the chance to remember those who fought and lost their lives during the war and to honour their memory.

“With fewer and fewer living survivors, it’s even more important than ever to remember the sacrifice’s these people made for our country. Teaching our children about the importance of Remembrance Day will keep the memories of these soldiers and brave individuals alive now and in the future.”

At The Co-operative Funeralcare – Widley, Mayor of Havant Councillor Rosy Raines helped to judge the poppy pictures created by children at Purbrook Junior School aged seven to 11 years. All of the children received a certificate for their efforts. 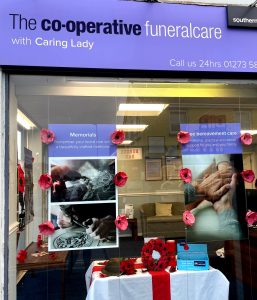 Linda Docherty, Widley Funeral Co-ordinator, said: “I am truly blessed to have such wonderful children help me in my display. I have also had a lady knit a poppy wreath for me and another lady made a cross with a poppy helmet which is absolutely amazing.”

At The Co-operative Funeralcare with Caring Lady – Peacehaven, Funeral Co-ordinator Kerry Tester incorporated the original helmet of her grandfather.

Kerry said: “The tin hat is original and was my Grandad’s from the Second World War. I am very proud to be able to display my late grandfather Harold Roberts’ hat in our window as my earliest memories of him were when he would get us to ‘build’ the poppies that he brought home from The Royal British Legion in September ready to sell in time for Remembrance Day.”

At The Co-operative Funeralcare – Farnborough, they have been overwhelmed by the artwork they have had in from the local infant, junior and nursery schools

Anne Whitehouse, Farnborough Funeral Co-ordinator, said: “We designed various simple poppy posters and sent out emails to local infant, junior and nursery schools asking if they would like to colour, paint or collage them for us to display in our window.

“We had no idea what a fantastic response we would get! The window shows all the amazing posters that have come back to us, so many that they had to be displayed back to back, which just means we get a fabulous wall of poppies to look at on the inside too.”

Southern Co-op’s colleagues will be marking the important day with a minute’s silence including at its local retail stores.