Window displays of poppies and memories are on show across Portsmouth as a message of thanks to all who fought in the First World War. 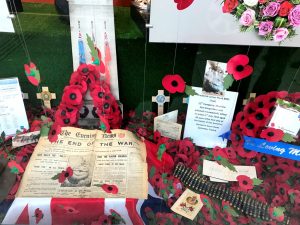 The public displays of thanks are taking place at Southern Co-op funeral homes in Portsmouth and beyond.

At the Eastney Road branch in Southsea, a photo is being proudly displayed of Funeral Co-ordinator Sally Chudley’s grandfather who was a sub lieutenant in the Royal Navy Reserve during the Second World War.

Sally said: “My grandfather was mentioned in dispatches for the part that he played in the rescuing of troops at the D-Day landings. I have put a copy of the certification in the window with a photo of him in his uniform along with some war poems.

“Lots of people have been coming up to the window to have a look and read the poems which is lovely.” 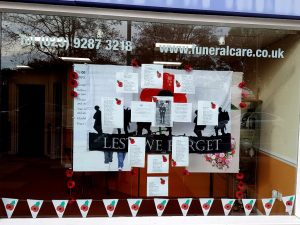 At the Fratton branch in Portsmouth, the window is decorated to remember all those who fought and lost their lives in the war including Funeral Co-ordinator James Wiltshire-Bowles’s Great Uncle.

The display also includes an original copy of The Evening Post announcing that the War had ended, a helmet worn by one of the soldiers and ammunition that was used during the war, along with some photos of soldiers.

James said: “My Great Uncle Private Frederick James Pluck was killed on 1st July 1916 aged 26 on the first day of the battle of the Somme.

“His photo is proudly displayed in the window alongside a presentation tin sent to the soldiers by Queen Mary, which contained tobacco and chocolate. 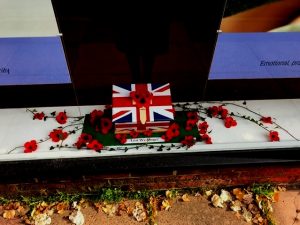 “We had one lady pop in whose father fought in the war. He was one of the lucky ones that came home, he was injured but he made it home.

“She got a bit emotional saying that this time of year he always wept at how thankful he was that he survived but then also for the friends and colleagues he lost. She passed on her thanks that the display had such meaning.”

In Copnor, local school children are helping to decorate the window with images from a drawing competition in relation to Remembrance Day being displayed in the window.